Hello all. I've been inactive for a hot second, due to various life issues- and book issues. However, I fully expect to get caught up on the backlog of reviews this weekend. Reviews of Maverick: The Success Story Behind The World's Most Unusual Workplace, To Sell Is Human: The Surprising Truth About Moving Others, Situations Matter: Understanding How Context Transforms Your World and Capitalism, Socialism and Democracy are forthcoming. There was also a terrible book in there, which I may or may not get to.

Following that, I will be starting on Zuckerberg's Year of Books- I had to wait on a hold list to finally get my hands on them, so I expect to be a bit behind him in reading them.
Posted by Unknown at 11:28 AM No comments:

[REVIEW] Drive: The Surprising Truth About What Motivates Us

Business books are almost never riveting reads. They are usually a slog through uninteresting case studies, mind-bogglingly bad visual aids and a few points of brilliance you probably could have looked up yourself on Wikiquote. Sprinkle in some buzzwords. Let simmer.

Drive: The Surprising Truth About What Motivates Us is an exception. I powered through it in 2 days and it never felt like a chore. This is despite having a title that sounds like a Buzzfeed title generator run amok. Don't get me wrong- it is still a business book and it is still intended to make you better at middle management or founding a startup or whatever. But it is more than that, besides.

Drive is, unsurprisingly, a book about human motivation. It is Dan Pink's contention that we (and by extension, the organizations we belong to and interact with) are stuck in an outdated mode of thinking about motivation- a mode of thinking that relies on carrots-and-sticks, rewards and punishments. A system Dan Pink calls Motivation 2.0, a system based on all the sort of things that would make B.F. Skinner squeal with delight. And Dan Pink doesn't agree with this system. Unlike many business books, he doesn't disagree and call it a day.

He begins the book with a study from the 1940s on problem solving in lower primates. Researcher Harry Harlow gathered together lab monkeys and presented them with a somewhat complicated lock and pin puzzle. The intention was to see if a system of rewards could entice them into learning how to operate and solve the puzzle. But it turned out the system of rewards was unnecessary- the monkeys threw themselves into the task of figuring out the puzzle before they were given any rewards. This made no sense in the behavioral theories of the day. Motivation in those days was viewed as a product of baser survival instinct (the first 'drive') and a hedonistic pursuit of pleasure and aversion to punishment and pain (the second 'drive'). The behavior of the lab monkeys required a third 'drive'- purely intrinsic and divorced from external rewards and punishments. It is from this third 'drive' that the book takes its name.

Next he moves on to the research efforts of Edward Deci. While a graduate assistant at Carnegie Mellon University, Deci assembled a group of research subjects to measure intrinsic and external motivators. One group remained unpaid for the duration of the study (three days of assembling the Soma puzzle, pictured below). This was the control and the members of this group remained relatively well-motivated and engaged throughout the course of the study. The other group, however, was paid for their performance on one of the days- after which payment was ceased. In a result that shouldn't surprise many people, the paid group performed better for the day which they were paid. But after the day they were paid, their motivation and effort fell below that of the unpaid group. From these results and other studies, Deci elucidated a theory of 'crowding out'- the idea that extrinsic rewards can actually remove or cancel out intrinsic motivation. 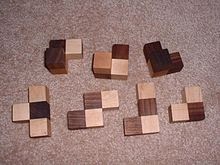 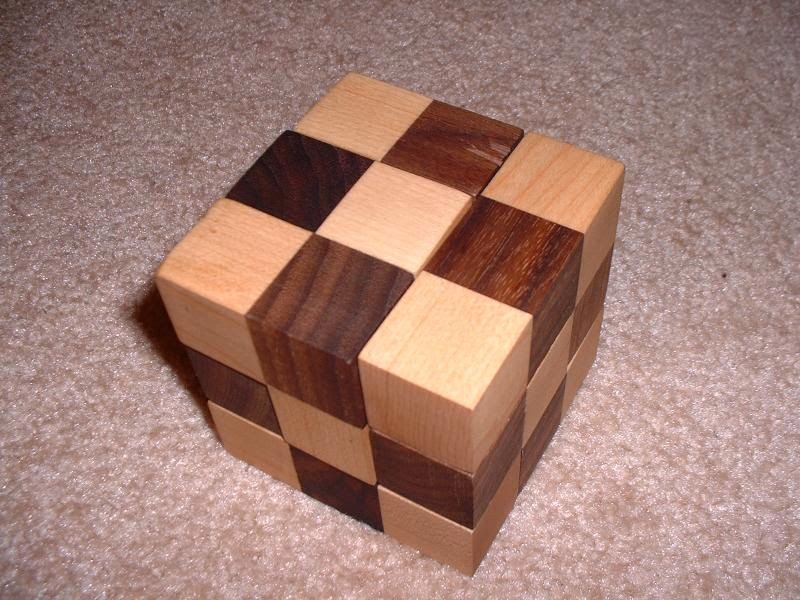 This theory of 'crowding out' is further explored in the negative effects of fines instituted by Israeli day cares (more famously seen in Freakonomics and Predictably Irrational.) Israeli day cares in the study tallied the number of tardy parents over a period of time. They were then divided into two groups- a control and an experimental group. The control group continued as before, merely tallying the number of parents late to pick up their children. The experimental group, meanwhile, instituted a fine to dissuade the tardy parents from showing up late to pick up their children. The end result is that tardiness actually increased at those daycares that instituted the fine- the creation of a punishment system had actually encouraged the behavior it was meant to discourage. The idea is that the institution of the punishment removed people's intrinsic motivation to not be tardy- a social obligation to the daycare workers- and replaced it with a price the tardy parents could rationalize. And when the fee system was removed? Parents continued to be late at the higher frequency seen during the study. Their intrinsic desire to not be late had been removed by the institution of a monetary punishment.

He doesn't stop there- he moves into 'positive psychology', self-determination theory, Mihaly Csikszentmihalyi's theories of flow and even the dreaded business case studies- exploring such institutions as Wikipedia (a platform where the only motivators are intrinsic), Atlassian (a software company following in Google's footsteps with 20% time), Meddius (a healthcare technology company where you only show up to work if you have to- what is called a "results-oriented work environment") and finally, Semco (the world's most successful example of workplace democracy and the subject of my next read). He uses examples from academia and business to further show that intrinsic motivators almost always win out over external motivators. Even if it didn't contribute anything of note, Drive would be a worthy read if only for all of the launching points it provides the reader.

It ends as all business books do- with a discussion guide. Drive calls it a Type I ("intrinsic motivation") Toolkit. It isn't just a series of bland reading comprehension questions or PowerPoint slides for the next corporate retreat. Drive's Type I Toolkit presents exercises that any person could use to determine their motivation and their trajectory in everyday life. Even the explicitly business-focused exercises are, as the chapter insists, applicable to anyone from an intern to a CEO. Consider the "pronoun test" created by Richard Reich- do you and your colleagues refer to the organization you are in as "they" or "we"? It can tell you a lot about the sort of organization you are in and where you are in it. The Toolkit even includes a Further Reading section not composed of the author's other books!

Overall, I would highly recommend Drive. It is not a very hard read and was worthwhile throughout. It definitely inspired a good amount of thinking, even though I had already seen some of the studies and examples contained in its pages. And as stated above, if nothing else, it is one of those books that opens up new avenues for exploration. Below, you can watch a video by RSA that provides a pretty good summary of many of the book's findings and conclusions- if you like the video, there is a good chance you will like the book.


Amazon link: Drive: The Surprising Truth About What Motivates Us

UP NEXT: Maverick: The Success Story Behind the World's Most Unusual Workplace, Ricardo Semler
Posted by Unknown at 11:08 AM No comments:

[REVIEW] Capital in the Twenty-First Century

I just finished reading Thomas Piketty's Capital in the Twenty-First Century. For those who are unaware (or who didn't finish it) Thomas Piketty's book is all about the past, present and future of wealth and income inequality. The increased public attention paid to this issue (Remember 'We Are The 99%'?) is probably what put this book on the New York Times Best Seller List. The relatively dry nature of the history of economic inequality is probably what left it one of the most unfinished.

All that being said, I found it to be a relatively easy and pleasant read. Piketty's treatise on the history of economic inequality could have been dense, arcane and completely incomprehensible to the normal reader- but it isn't. It is almost refreshing to read an economics book that isn't written for academic eyes only. Some of that is because, well, Piketty isn't exactly your average economist. (For one, his book made the New York Times Best Seller List. That probably makes him an outlier.)

Piketty is an economic historian and that makes all the difference. Capital reads like a history book and the portions dealing with the history of income inequality are really, the best parts. One of the more pleasant surprises is Piketty's use of literary examples of the stratified and highly inegalitarian societies he analyzes- Jane Austen, Honore de Balzac and Henry James are all referenced. Piketty manages to humanize the text and give the reader a better sense of scale when he begins to discuss inequality in more quantitative depth. Charts and graphs are presented where immediately relevant and useful, which is not often the case in books like Capital. (The footnotes and the book's website are for a specific type of power-reader.) Piketty managed to bring the highly stratified, inegalitarian society of the past to life- and that is no mean feat for an economics tome.

It is when Piketty strays from economic history that he begins to falter. The rest of the book is composed of his own forecasts of economic inequality and finally, his policy recommendations for how to deal with the 'contradiction of capitalism.' I'm not here to argue about his conclusions- plenty of more qualified people can waste their time doing so more effectively than I can. There's still plenty of good information to be found and a few bright points. (Ingenious indirect measurements always impress me, whether in the 'hard' or 'soft' sciences and Piketty's use of college endowment data to examine sovereign wealth funds is certainly ingenious.) It's just that these final portions of Capital were not as engaging and were much closer to what I imagined the entire book would be.

Overall, Thomas Piketty's Capital in the Twenty-First Century was a good read and certainly one I will revisit. The history is brilliant (especially when one realizes that Piketty is working on virgin soil- this is the first work to truly explore economic inequality in such depth.) Even where the rest of the book is less interesting, it is no less edifying. I'd highly recommend it to those interested in economics or social justice. It isn't often enough that those two interests coincide- and even more rare when they coincide in a book written for the modern reader.

Final musing: Piketty's policy recommendations were remarkably less radical than I had expected, given the vitriol directed at him by The Financial Times and FOX News, among others. It isn't often that a book all about economic inequality ends with "Let's tax all wealth at a marginal rate and strive for more transparent accounting practices" instead of "Kill the bastards" or "Property is theft".

NEXT UP: Drive: The Surprising Truth About What Motivates Us, Daniel H. Pink
Posted by Unknown at 10:37 PM No comments: